Moving between two of the city’s favourite spots will become a lot easier this summer, with construction getting underway on a new entrance connecting the Victoria Esplanade and Manawatū River. 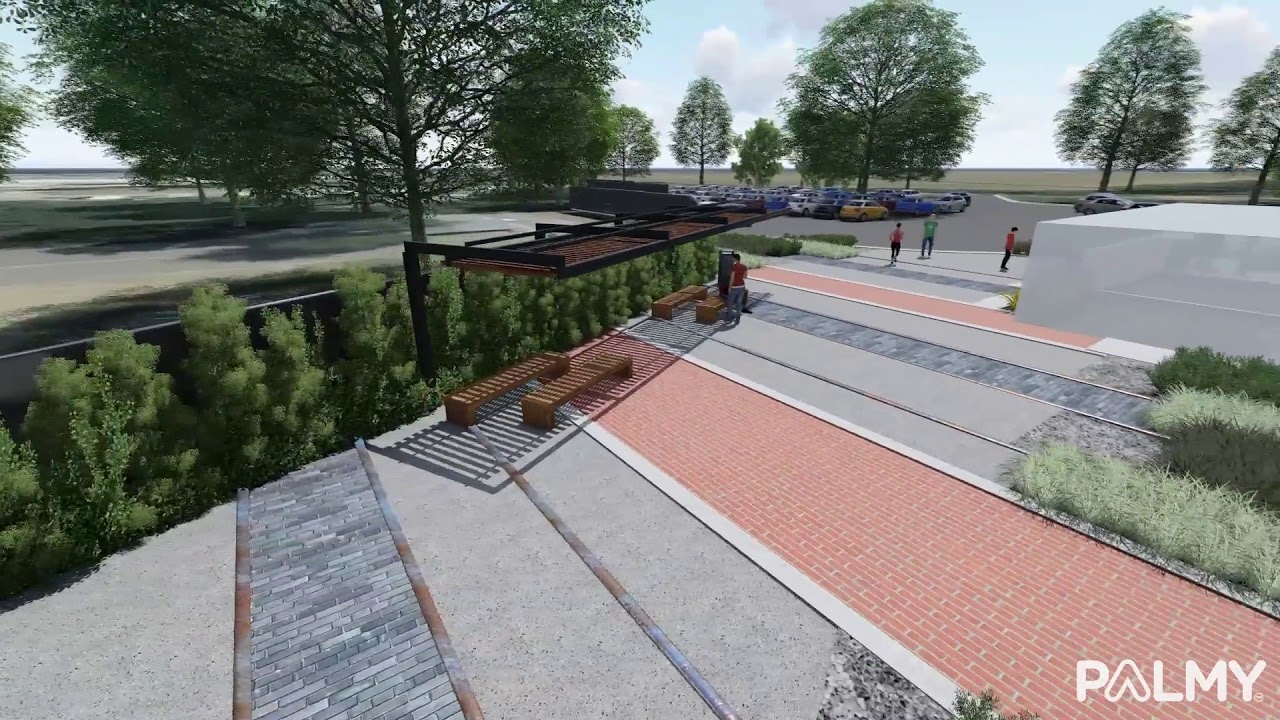 The accessway has a railway theme and includes railway track previously used in the city.

The new entrance will see the small track next to the Scenic Railway Station converted into the main entry point from the park to the river.

Palmerston North Mayor Grant Smith says the location was selected for many reasons.

“We’ve identified the need for a clear entrance point from our premier park to our awa, and this accessway will do just that. This is an obvious location as it has the carpark, is close to the Park Road entrance to the park, and next to the Scenic railway station, Lido and Ongley Park.”

Council Parks and Reserves Manager Kathy Dever Tod says the Esplanade Scenic Railway and the campground were involved in the design.

The accessway has a railway theme to tie into the station and includes used railway track that has been used in our city.

From the carpark you will walk down a concrete path, and over a boardwalk through the titoki trees, to a lit viewing platform and pergola with seating areas giving views to the river and He Ara Kotahi. The pathway will be a combination of concrete and wood to ensure it can be used by everyone.

Construction is starting over the coming week and is expected to take two to three months. The current access track will be closed during construction. The work will begin on the river pathway side, and then move up towards the railway station. The carpark will remain open at all times, but at times contractors may need to cordon off carparks for heavy machinery.

Making our awa accessible to everyone

In July the pathway on the Massey University side between Fitzherbert and He Ara Kotahi bridges was also converted from limestone to asphalt.

Ms Dever Tod says this was done to ensure our awa was accessible to everyone.

“One of our key goals in the Manawatū River Framework is to see more people enjoying our awa each year. Converting some of the popular sections into concrete or asphalt means the pathway can be better used by people with mobility concerns and strollers, and children learning to ride with scooters and bikes.”

The river continues to light up

Before colonisation, Rangitāne would freely move up and down the Manawatū awa from one kainga to another, including moving to havens of safety at Turitea and Te Motu o Poutoa. During this time rangatira wore paepaeroa kahu or cloaks as statements of mana. Some cloaks would include taniko border designs. Artist Reweti Arapere has abstracted a taniko pattern to cloak the whenua or land alongside the awa, acknowledging historic journeys between kainga and pā.

In late July, a glowing pattern was installed on the same stretch of path (on the Massey side, between Fitzherbert and He Ara Kotahi bridges) as another reason to draw people to our awa.

Ms Dever-Tod says within the next five years, this area around this loop will be lit, with budgets already assigned to the Fitzherbert Bridge and back of the Victoria Esplanade.

“The lighting will differ, but each provides a reason for people to visit, spend longer at the river, and also provide a safety element.”

Ms Dever-Tod says the pattern uses a glow sand which absorbs UV light during the day and then expels it at night. It is a similar eco-friendly technology that has also been used on Tini whetū ki te Rangi, Ko Rangitāne nui ki te whenua - our new glow in the dark kowhaiwhai pathway at Albert Street.

This pattern was also designed by Rangitāne.