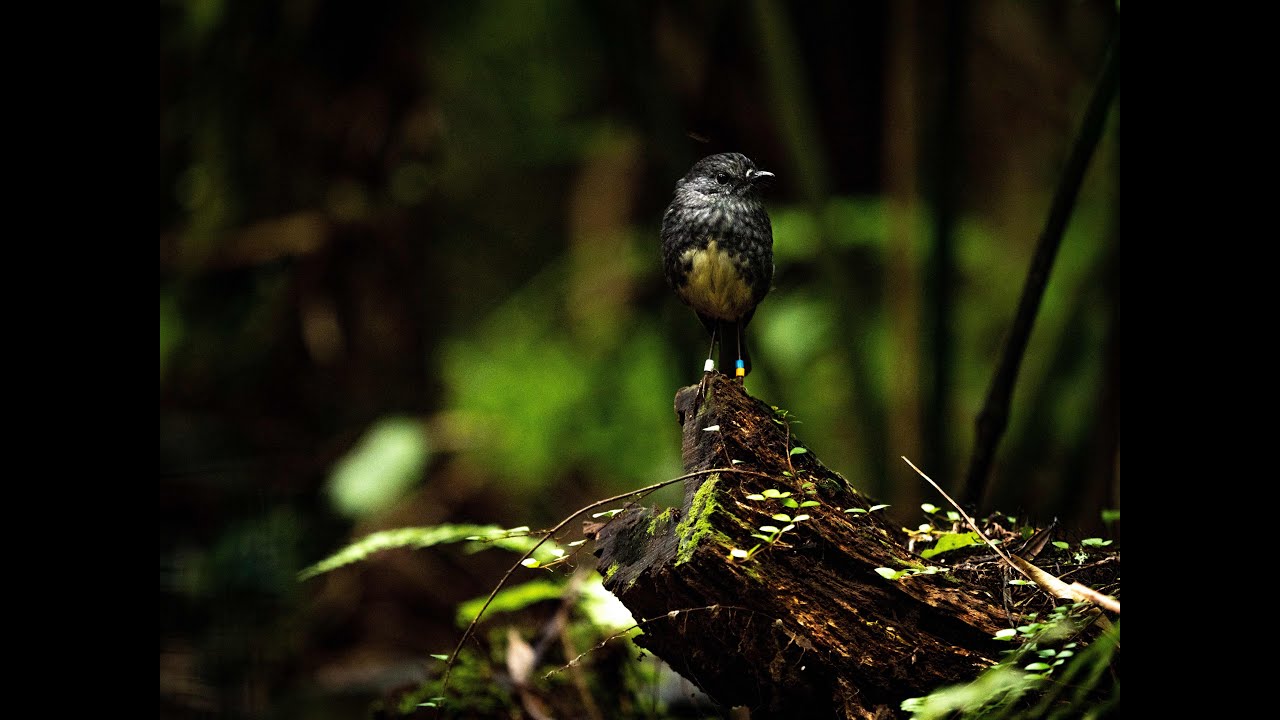 Watch a short documentary on the translocation of toutouwai from Bushy Park in Whanganui to Turitea in Palmy.

Driven away by predators like stoats and rats, it had been decades since toutouwai occupied the reserve.

Now the small bird has come back to roost. It’s hoped the April release of 40 robins to the 4,000ha reserve will cause rapid population growth, and that the birds will venture down through Sledge Track and then further into the city for everyone to enjoy.

With its slate-grey feathers and long thin legs, the robin is friendly, trusting, intelligent and confident. Its return to Palmy has taken 15 years of focused conservation efforts, including restoring native plants and trapping predators.

Palmerston North City Council’s senior climate change advisor, Adam Jarvis says this project was built on the back of years of investment by the community.

“We’ve worked with the community to place thousands of traps over 40 square kilometres of the Turitea Reserve and to connect the bush to the city through the Green Corridors restoration projects, so it’s very exciting to finally get to this point.”

We’ve a chance to restore a key part of the ecosystem that’s been missing from Turitea for decades.

Since 1991, robin populations have been established on predator-free islands and mainland sites encircled by predator-proof fences, such as Zealandia wildlife sanctuary at Karori and Bushy Park Tarapuruhi Forest Sanctuary, near Whanganui.

The 40 robins released into Turitea Reserve were translocated from Bushy Park Tarapuruhi. Tarapuruhi means “place of abundant birdlife”, with the land for this sanctuary reserve gifted to Forest and Bird in 1962.

Rangitāne is a project partner, as kaitiaki of the Turitea Reserve. Te Ao Turoa environmental officer for Tanenuiarangi Manawatū Incorporated, Paul Horton says the robins’ translocation was an awesome opportunity. His office deals with re-establishing or enhancing environmental space.

“In this case, we’re reintroducing a species that would have once been here. I look forward to having the opportunity to interact with them now they’re in Turitea,” Horton says.

The robin is a very charismatic bird. They hop around your feet with their own personality and quirks.

“Seeing them flying around in the ngahere and interacting with them and other taonga is something Rangitāne respects as a huge responsibility. We hope they flourish and we’re appreciative of all the support from the Council, Massey and the other organisations and people who’ve worked together to make this happen.”

Dr Liz Parlato is an ecologist and postdoctoral fellow at Massey University. She’s worked with robins for more than 20 years and shares in the project excitement.

“How wonderful that this site [Tarapuruhi] didn’t have robins, and after reintroducing them the robin population established itself and exploded in numbers. This enabled us to capture the robins to start another population in Turitea Reserve.

“Robins are incredibly special birds. They are wonderful to work with – very friendly and inquisitive. They always come up and say hello. It’s easy to monitor them and their breeding.”

Parlato assisted the team capturing the robins for moving to their new home. In her pockets were pottles of live mealworms – a favourite kai for robins that was used to attract them into cage traps. Some were easily enticed, others required patience (remember, they’re an intelligent bird).

Once securely caged, the birds were delicately handled. At the Bushy Park operation base, they had their legs and wings measured. Dr Kevin Park, a conservation biologist from Parker Conservation, weighed the birds, checked their health, and took swabs. The swabs to screen for diseases and to trace parasites were sent to Rebecca French at the University of Sydney.

Metal identification bands were attached to their legs. A robin can live up to 16 years, so the numbered and coloured bands mean they are easily identifiable.

As well as the bands, Massey University’s Prof Doug Armstrong and Dr Zoe Stone were on-site during the capture to attach a small transmitter weighing just two grams to each robin by hooking a harness on to the bird. This will assist researchers to easily track and find them in their new Turitea home. Each bird will have its own frequency so their movements and locations can be recorded and monitored. A drone is used as part of this process.

All going well, the robins will settle well in the Turitea Reserve and their numbers will take off. In a few years, you might even spot them while you walk the Kahuterawa Sledge Track, hopping right up to you as you climb, looking for bugs turned up by your footprints.

How does predator control work?

By controlling and lowering the number of predators, such as possums, feral cats, rats and stoats, robins can breed more successfully. Within the first year of a pest control operation, the robin population will often double in numbers and most males can obtain a mate.

This story was originally published in the winter 2021 issue of PalmyProud. Read the latest issue.