At 22 hectares, Ahimate Reserve in Awapuni is one of our largest riverside parks. Home to the city’s most popular riverside beach, a dog agility park and fenced enclosure, mountain bike tracks and a natural playground.

You can enter the reserve from either Buick Crescent or the end of Maxwells Line, next to Paneiri Park. The Maxwells Line entrance is best for carparking and access to the dog agility park and enclosure. For quick access to the beach, walk in from Dittmer Drive.

Ahimate is all about family fun, and that includes your furry friends.

Dogs can walk leash-free throughout the park. We also have a fenced enclosure they can burn off energy in and an agility park to test their skills and train them.

Ahimate Reserve is a great place to access the Manawatū River Pathway and one of Palmy's best swim spots.

What was once the neglected Waitoetoe Park is now front and centre in our plans to connect people with the Manawatū River.

We’ve been working with the community and Rangitāne to develop Ahimate into a park treasured for its sense of wilderness and remoteness, despite it being fewer than 5km from the CBD.

Waitoetoe was named by Pakeha from the words wai (water) and toe-toe (plant), but in 2017 the city’s main iwi, Rangitāne, pushed for it to return to its original name - Ahimate.

The park's location was once home to Ahimate pā where the Paneiri people once lived under Chief Te Kurupu. The pā was an important location for growing food, especially kūmara.

Ahimate loosely translates to ‘cremate’ which was something the Paneiri did but wasn’t common among Māori.

Now, several paths run through the park, including well-formed limestone tracks that connect to longer walkways along the river. These tracks are very popular with cyclists, runners and dog walkers.

Instead of a playground Ahimate Reserve is focused on getting children to enjoy nature. We’ve purposely left big tree logs, leftover branch cuttings, big piles of dirt and low hanging trees to play on.

There’s also a tree hut and nets hanging between trees to climb on.

Mountain biking groups have developed a series of tracks and jumps, platforms and see-saws throughout the park and we are looking at adding more for young children to learn on.

We are working with Rangitāne on the development of the park to make sure our work honours the culturally significant site. In 2019 the iwi is installing a waka launchpad on the edge of the river. The cultural significance of Ahimate pā will be honoured with a series of pou carved by Warren Warbrick using timber rescued from logs washed downstream after erosion at the Ashhurst Domain. The area will be planted with medicinal plants once used by the Paneiri people.

Community groups are heavily involved in planting at the reserve as we remove weeds and transform it into a park surrounded by native plants, fruit and nut trees. This will help improve biodiversity and native wildlife in the area.

Watch: "Why Ahimate is our favourite Palmy Park" 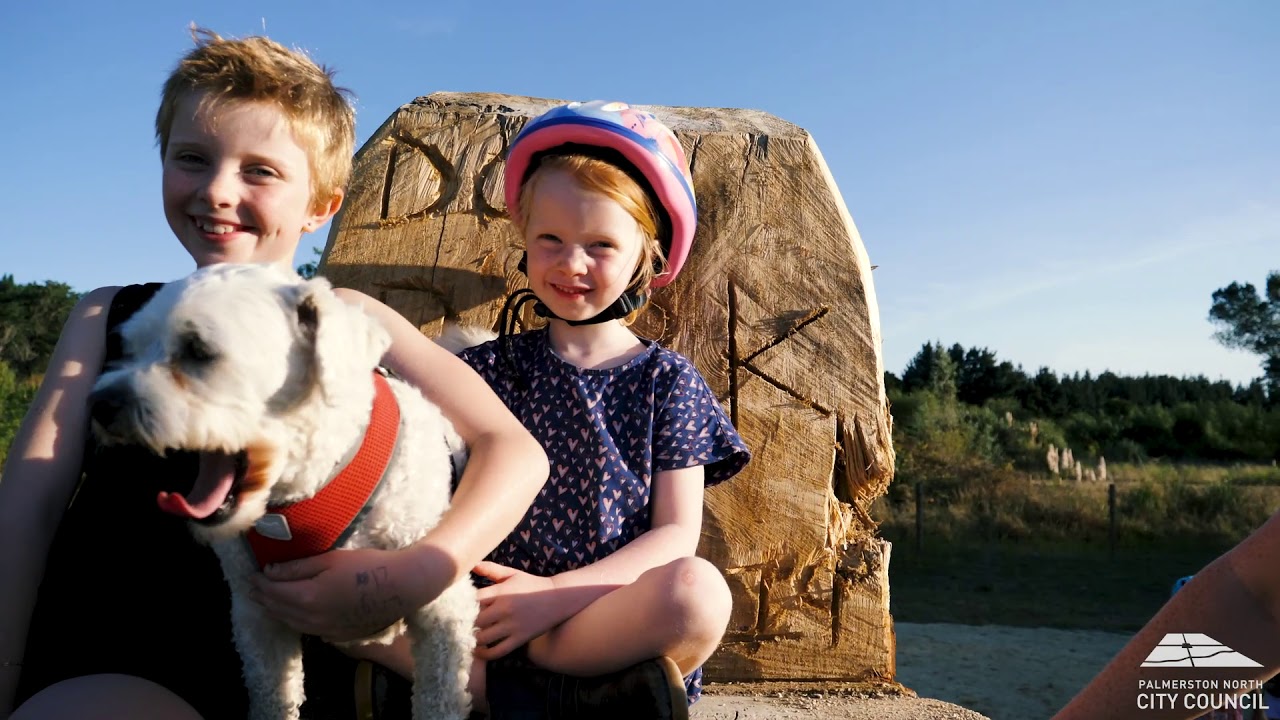 This year we’ll be upgrading the playground at Palmy’s historic Savage Reserve – and we want your feedback on what it should look like.